A protected bivouac spot under a big rock in the area of Unterer Grindelwaldgletscher served as starting point for the first ascent of the Schreckhorm by Sir Leslie Stephen together with Ulrich Kaufmann, Christian and Peter Michel on 15/16 August 1861.

The first hut, Schwarzegg, was built in 1877 by the Section Oberland of the SAC and was taken over in 1882 by the Section Basel. In 1886 it was extended by an extra 10 places and renovated in 1895. At that time it was considered to be the nicest hut in the Bernese Oberland.

Instead of undertaking a big renovation of this hut a project to build a second one was started in 1905 and the Strahlegg hut was built in 1910, one hour walk beyond the Schwarzegg hut, at 2682 m. To begin with it could sleep 30 people, later 50. The material for the construction had to be carried from the Eismeer Station of the Jungfrau train via Zäsenberg. The Schwarzegg hut remained in operation until 1949 but had then to be definitely abandoned because the renovation costs could not be born by the section.

In the winter 1976/77 an avalanche heavily damaged the Strahlegg hut. This is why a new hut, the Schreckhorn hut, was erected about 100m above the location of the original Schwarzegg hut. It was inaugurated in 1981.

Hans and Rosmarie Balmer became hut wardens when it first opened and ran the hut every summer until 2016. From summer 2020 the hut will be run by Urban Hüsler from Riehen.

On several occasions the approach path was damaged by falling rocks, mudflows or overflowing streams. It is closely monitored and repaired whenever needed. It is one of the most impressive approach paths to a hut in the Swiss Alps. 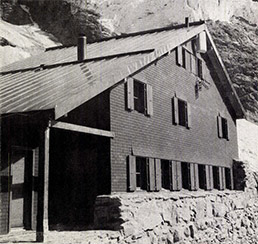