The ascent of the Weisshorn via the Schaligrat ridge starting from the Rothorn hut via Ober Äschhorn – Hohlichtgletscher – Schalihorn 3975 m, crossing the Schalihörner and subsequently descending to the Schalijoch represents a long high alpine day-tour. This is why the Basel section had the idea to install a refuge (box construction) on the Schalijoch saddle, thus allowing climbers to do the ascent of the Weisshorn over two days.

The project for a refuge was started in 1960 and it was built in 1963 on the occasion of the 100th anniversary of the Basel Section of the SAC.

The weather was rather miserable at the time of the construction of the shelter (70 cm of fresh snowfall). During one week the builders worked in difficult conditions and lived in tents. The bad weather made helicopter transport impossible, so they had to walk back down to the valley in the deep fresh snow.

In 1983 the refuge was covered with an isolating shell Two years later the foundations were built higher in order to avoid condensation inside the refuge.

Between 30 and 80 people use the refuge every year. 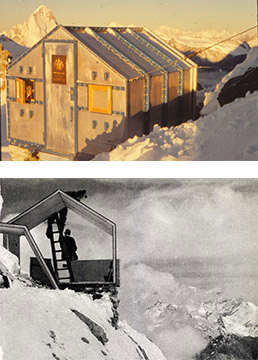